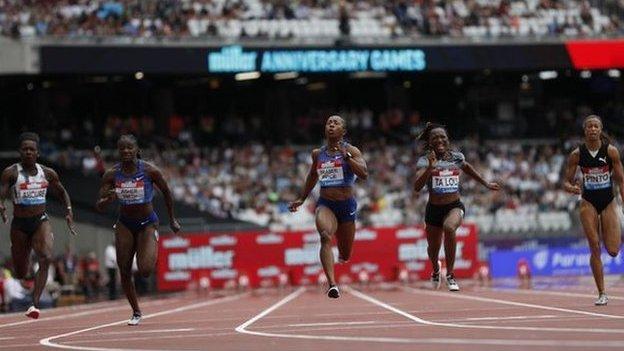 Combine the 400m with four athletes, a baton, and a heated rivalry, and now you have one of the most exciting events to race or watch. Either way, in the open 400m or the mile relay (4X400m), the track athlete has to have a great combination of power, acceleration, speed, and long speed endurance in order to be successful in this event.  However, there is more to learning how to run the 400m than you may think.

Most long sprinters are not aware of the proper way to run the 400m and some even try running the 400 all out with a 100% effort from start to finish. This isn’t a bad place to start because you can tell that this type of athlete is very determined to race the entire 400m because as we all know, it is a sprint event. Now all we need to do is get this athlete to understand how to run the different phases of the 400m faster and they will be able to maximize their potential as a 400m specialist.

Understanding the 400m
The 400m can be known as the dreaded long sprint race that nobody wants to run, but generally speaking it isn’t that much different than the 200m with the exception of speed endurance. Like the 200m, the 400m race has a drive phase or acceleration out of the starting blocks. After the 400m runner has accelerated out of the starting blocks, they will try to reach and then maintain a near maximum race velocity.  However, the greatest challenge in the 400m is not only fine tuning the energy system training, but teaching athletes how to actually race the 400m faster so they can be successful beyond 200m-300m.

The importance of the 400m Start
Before any athlete learns how to run the 400m faster, it is important that they understand the value of the start and the acceleration in their race. Young 400m athletes will tend to run the 400m with the idea that they should start out slow and progressively build their speed over the duration of the 400m. Don’t do this. If a 400m runner goes out too slow from the start, they will not be able to utilize a key energy system that allows for a 6-7 second window where no lactic acid and hydrogen ions will be produced. This happens to be the first 6-7 seconds of any maximal effort, which ends up being the first 6-7 seconds of the 400m race. If anything, use this opportunity to your advantage and power out of the blocks like a lean, mean, 400m racing machine.

The acceleration to near maximum race velocity zone will range between 50-70m (depending on the athlete) and then transition into the cruise control phase of their 400m.

Cruise control
The next phase of the 400m is the relaxed arm phase or cruise control phase (80-130m in length). This is when the 400m runner continues to maintain the same arm and leg turnover as they did in the first 50-70m, but the range of motion (ROM) of the arm form is decreased as the goal here is to conserve arm energy.  What this means is the 400m runner does not need to pump the arms as aggressive and as far (ROM) because the arms will become very important later in the race.

It is very important that the 400m runner does not show any visual signs of slowing down during this phase. The idea is to maintain race velocity, not jog/slow down. This cruise control phase can range anywhere between 100-150m.

Building the arm form back to 100%
When the 400m runner is around the 200m, they will go through a “building” phase (feels like re-accelerating) where they incorporate more energy toward their arms again with a progressive increase in range of motion and energy output over the next 20-50m. If we were to compare both the cruise control phase and “building” phase to driving a car, it would go something like this.

Imagine that you have the cruise control set for 51mph (cruise control phase) while following a car but there is too much oncoming traffic for you to pass. You see a passing lane up ahead and when the opportunity arises, you gradually push on the accelerator (building phase). This is what the transition into the building phase is going to feel like as you incorporate more energy to your upper body.

All out!
Here is the important part where the arms come back into play. As the 400m runner builds the arm form back up after the cruise phase, they will go all-out with a little more than 150m to go to the finish. This is like pushing the accelerator to the floor in a car. Out of shape 400m runners will most likely wait to go all-out when they are closer to 120m to go to the finish.

Remember the analogy used earlier about driving a car…
In the all-out phase (150m to go), imagine that you are back in that passing lane and you have gradually pushed on the accelerator to pass (building phase). The only problem is that the jerk in the other lane decided he wants to drive fast when there is a passing lane. Also, it’s not a very long passing lane, so you have to pass quickly. You begin to floor it. This is what it is going to be like when you have about 150m to go to the finish.

“Lift”
Now that the 400m runner is going all-out and driving hard out of the curve to the finish straight, they will eventually need to use their arms to help create what most coaches refer to as “lift”. As the 400m runner gets closer to the finish line, they will have a little more emphasis in driving their arms upward. In order to create “lift”, they will drive their arms upward in an aggressive manner and keep the same range of motion as they would in any all-out sprint.

The reason the 400m runner wants to try to create “lift” is because by now the legs are very tired and need all the help they can get from the arms. It is important that the 400m runner does not over emphasize in increasing the arms range of motion beyond normal sprinting form. Remember, it’s not the range of motion we are trying to increase; it’s the emphasis on the upward drive within the arm form. In other words, we are trying to create “lift”, not overly exaggerated and sloppy “uppercut” arms.

Finish line
As the 400m runner approaches the finish line, they will need to make sure they keep driving and that they lean across the line. It is all too common for young athletes to run the 400m and then slow down the last 2m-5m before the finish line. Slowing down just before the line will compromise valuable time and could mean the difference between a school record or even a state championship.

Putting the phases of the 400m together
Now that you have an idea of how to run the 400m faster, you will need to learn how to perfect it. When you run the 400m, each phase has a different range that can be tweaked as you gain more experience and as your skill and fitness level improve. Learning how to run the 400m in a race is going to take time and will not happen overnight. In fact, learning how to run the perfect 400m could take an entire season if not multiple seasons. Don’t be discouraged if you don’t figure it out your first time. It takes practice and patience to really find the perfect ranges that compliment your 400m potential.